Update on "Center of the Surf" and our great upcoming gigs!

We hope you're having a wonderful summer - and listening to a lot of surf music, the best music for the summer, of course!  And we also hope that our new live CD, "Center of the Surf", has been one of your favorites this summer!  You may have heard about the manufacturing glitch that forced us to delay the release of the CD by two weeks, until May 8th.  That glitch has unfortunately also significantly delayed the availability of the digital downloads of the album, but we're extremely excited to be able to finally announce that those are now available at CDBaby.com, and will very soon also be available on Amazon, iTunes, etc.  Sorry about the delay, but still plenty of summer left to enjoy this release if you prefer to download (or stream) rather than buy CDs.

And enjoy it you WILL, if the first two formal reviews of "Center of the Surf" are anything to go by: Storm Surge of Reverb and Progarchy are complimentary to the max!  (Check out their summaries towards the top of our home page.)

We're also very happy to announce that the two 'missing' tracks from our Surf Guitar 101 2017 Convention appearance ("Caravela" and "Farthest Shore") WILL be appearing on the "Reverb Nation" compilation, coming out shortly!  Here's the announcement by John Blair: "Last year's SG101 Convention, as many of you know, was professionally recorded by THREE-TIME Grammy Award winning producer and engineer, Mark Linett. He mixed and produced 27 tracks by 15 bands that are represented on "Reverb Nation: Live at the 2017 Surf Guitar 101 Convention." The CD will arrive in time for this year's Convention on August 4. This CD presents some of the best contemporary instrumental surf music, with wide distribution by Entree Records, a division of Sierra Records, that hopefully will reach the ears of the non-initiated around the country and world." 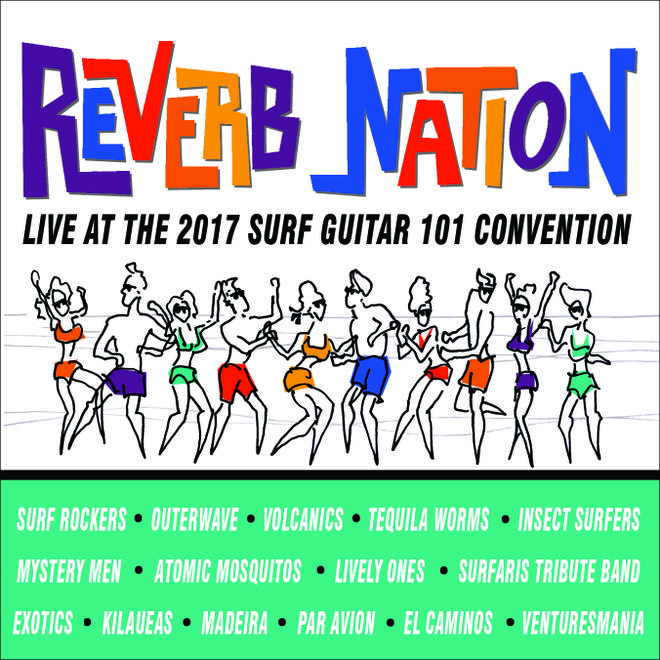 Finally, we have some absolutely amazing shows coming up!  But first, we should mention that we had the time of our lives at The Hukilau in Fort Lauderdale, FL in early June.  It was a (surf!) party for the ages, with a very large and very enthusiastic audience, some of the very best modern surf bands (including Los Straitjackets, the Exotics, The Intoxicators, Black Flamingos, The Martian Denny Orchestra, and more!), and organizers that couldn't have treated us any better!  Thank you to ALL at The Hukilau for a truly wonderful experience!  And we have more wonderful experiences to come, in particular our first time at one of the greatest surf parties in the world: the Asbury Park Surf Music Festival on Saturday, August 18th!!!  We'll be joining an out-of-this-world lineup of Satan's Pilgrims, Surfer Joe, The Coffin Daggers, Frankie & The Pool Boys, The Volcanics The Black Flamingos, Les Agamemnonz, The Sufrajettes, and many more!!  Wow is about the only thing to be said in response to THAT!   We also just added a show in Philadelphia (at a club with the greatest name EVER - Kung Fu Necktie!) the night before Asbury Park, with Surfer Joe and the Primitve Finks, as a bit of a warm-up.  Exactly four weeks after Asbury Park we are very happy to be returning to the "Makahiki - A Night of Tiki" event in Indianapolis, on Saturday, September 15th - now significantly expanded (at the Slovenian National Home) and also featuring the Martian Denny Orchestra and the Dyes!  Finally, we'll be returning to Tip Top Deluxe in Grand Rapids with the local heroes the Concussions and America's favorite Shadows-tribute band the Troubadours for a repeat of the truly wonderful show there last December!  So, a lot of great stuff to look forward to!

We leave you with another video edited together by Patrick, this one accompanying "Tribal Fury" from "Center of the Surf".  Enjoy and have a great rest of your summer - hopefully with "Center of the Surf" as its soundtrack!  And hope to see you in Asbury Park, Philadelphia, Indianapolis or Grand Rapids in the next few months!