The Madeira began in 2004 in Indianapolis, IN. The band features Ivan Pongracic on lead guitar, the founder of the 1990s surf music icons the Space Cossacks; Patrick O'Connor on rhythm guitar, the founder of the Indy space-surf mavens Destination: Earth!; Dane Carter on drums; and Todd Fortier on bass. We have released seven CDs: “Sandstorm” (2005), “Ruins” EP (2006), “Carpe Noctem” (2008), “Tribal Fires” (2012), "Sonic Cataclysm - Live" (2014), "Ancient Winds (2015) and "Center of the Surf - Live" (2018), all on Double Crown Records from Bellingham, WA. We've played all around the US, including four California tours as well as shows on the East Coast and in the South, though we primarily play in the Indiana/Illinois/Ohio/Michigan/Wisconsin area. We also headlined the third and final night of the 2009 Surfer Joe Festival in Livorno, Italy, followed by a 10-day Italian tour.

The Indianapolis weekly paper NUVO included "Carpe Noctem" in their April 2014 article "100 Best Hoosier Albums Ever," among albums by music legends Wes Montgomery, the Jackson Five and John Mellencamp. The band was also featured in a full-page article in the March 2014 issue of the Guitar Player magazine in the column titled "Now Hear This - Snappy Profiles of Players You Should Know." The May 2019 issue of the Vintage Guitar magazine featured the band in an article on the current surf music revival, referring to us as the "leading lights of the revival". UK's Pipeline magazine, the leading surf/instrumental-rock fanzine in the world, selected “Carpe Noctem” Album of the Year in 2008, "Sonic Cataclysm" Album of the Year in 2014, "Ancient Winds" Album of the Year in 2015, and “Sandstorm” and “Tribal Fires” as runners-up for the Album of the Year in 2006 and 2012, respectively. 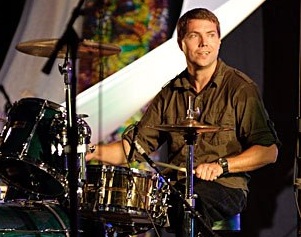 Dane has been playing drums for nearly 30 years. He developed a strong technical foundation in school marching and concert bands and honed his craft by working in community theater. Playing in The Madeira is sweet revenge to everyone who ever told him to slow down and play softer. Some would say Dane has an overdeveloped appreciation for listening to prog metal and jazz, but he is impressed by any music done well. Dane is thankful for the challenge and joy that comes from making music with good musicians and friends.

Dane lugs around a Yamaha Recording Custom or a Gretsch Catalina Club kit, but will play about anything to avoid lugging. He uses various Sabian AA and AAX cymbals and a Wuhan chinese cymbal. Dane uses Vater fusion sticks with nylon tips. 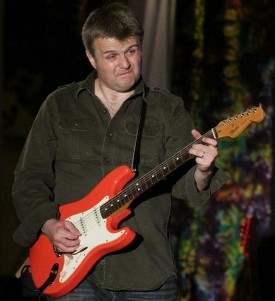 Ivan started playing the guitar at the age of 13, while still living in Yugoslavia (now Croatia), under the heavy influence of the Beatles and, more importantly, the Shadows. His father played in several Shadows cover bands in the Sixties, even making a living playing at a hotel on the Adriatic Sea the summer of '66, so Jr. grew up surrounded by the twangy sounds of Hank Marvin's Stratocaster. He discovered instrumental surf music his first year in college, in '86, when he came upon a compilation of the Challengers, who dressed just like the Shadows, played Fender guitars, and even covered a bunch of songs by the Shadows. Ivan's awareness of surf music steadily increased over the next eight years, while he played in many different bands, in many different styles: hard-rock/metal, classic rock, progressive, alternative, and noise-dream rock (a la My Bloody Valentine).

All along his love of instrumental and surf rock grew, until in '94 he became aware of an instro-rock revival already under way. The deal was sealed the second time he saw Laika & the Cosmonauts perform live in '95 - he was going to play surf music. Within a few months, in the early '96, the Space Cossacks were born. The band lasted until 2000, and recorded two highly acclaimed CDs on MuSick Recordings, Interstellar Stomp (1998) and Tsar Wars (2000), and several singles plus many compilation tracks (as well as the posthumous best-of Never Mind the Bolsheviks (2005). The band toured the south and the west coast, played in NYC and Boston as well as San Diego and Orange County, and even had a song included on Electronic Arts' Kelly Slater's Pro Surfer video game. The Space Cossacks came to an end when it became too impractical to continue the band with Ivan first living in Indianapolis and then Michigan, while the rest of the band was still in Washington, DC.

This was a chance for Ivan and his father, Ivan Sr. to fulfil their long-held dream of forming a true Shadows tribute band. The Troubadours' first show was in 2000, and since then they have played two Shadowmania North America events in Toronto (2001 and 2003), as well as gigs in Indianapolis, Detroit, Chicago and many spots between, preaching the gospel of the Stratocaster twang and converting many a soul along the way!

But Ivan missed playing hard-edged original surf/instro music, and what started as just a side-project between Dane Carter, the Troubadours' drummer and Ivan in 2000, became a full-blown band in the Spring of 2004 - the Madeira was born. This has truly been his dream band, going far above and beyond the hopes he had for the band when starting out. He looks forward to many more accomplishments and milestones with these three friends, who are also among the very best musicians with whom he’s ever had the pleasure to play. 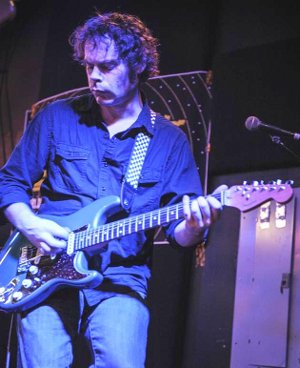 Having shunned rock & roll from an early age, Patrick finally succumbed to its charms when he picked up an electric guitar at age 13. Heavily inspired by the Beatles and Queen, he spent a great deal of time learning songs from his favorite records, as well as writing some of his own. Fueled by his love of alternative bands of the late 80's and early 90's, he began playing at various venues in and around
the Indianapolis area.

In the mid-1990's, he became interested in 60's instrumental rock and surf music, predominantly through The Ventures and Dick Dale. In 1999, he founded Destination: Earth!, a primarily instrumental, surf-influenced band of his own, which became popular in the regional music scene and proceeded to release four full-length discs independently over the course of the next four years.

Having posted an ad for surf musicians, Patrick received a call from Ivan Pongracic, whom he was already familiar with through Ivan's band, the Space Cossacks. Ivan educated Patrick on the history and development of surf music, as well as turning him on to many of the more traditional bands of the early 60's, as well as the present day.

Patrick relocated to southern California for a few years in the late 2000's where he was further immersed in the surf music scene. 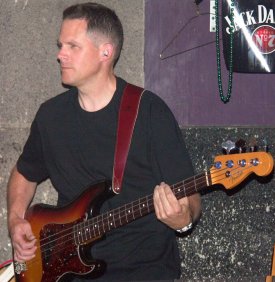 Todd has been playing bass since his senior year in high school when a friend sold him a Fender Jazz Bass and taught him how to play a few songs. During his college years at Georgia Tech, he played in several bands in Atlanta, GA and Richmond, VA which ranged from rock cover bands (The Kopps) to a female-fronted Motown revival band (Venus Envy) to an all original female-fronted band with strong leanings to The Cure (Mona Bang Bang). Being so close to Athens, some of his favorite bands and early influences were Pylon, R.E.M., Flat Duo Jets and Love Tractor.

After college, the bass sat in its case for a few years as Todd started his career in engineering. Following one of his several moves between the San Francisco Bay Area and Indianapolis, he remembered the joys of playing and creating music. After a move back to Indiana in the fall of 2001, Todd joined the Christian rock band Lifeboat 14 which played around the state for about two years. After a short break from music following the addition to the family of his third child, Todd has joined the Madeira to become Ivan's most recent student in the quest for education and creation of authentic surf music.