We are in Guitar Player magazine! 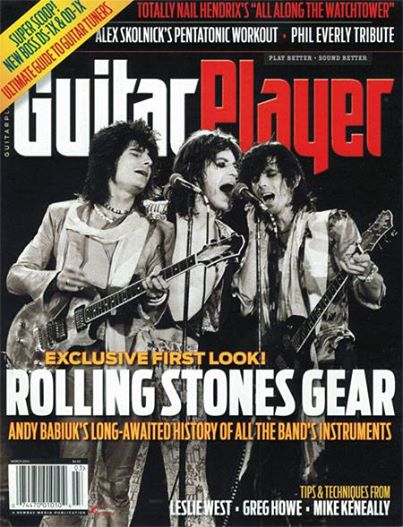 Happy New Year, Madeira friends! We hope you are getting through this horrible, horrible winter and anticipating the spring - just five more weeks to go!

Here's some BIG news: we are beyond thrilled to report that the March issue of the legendary Guitar Player magazine has a full-page feature on the Madeira! We are in the section titled "Now Hear This - Snappy Profiles of Players You Should Know," which in the past half a year has featured two other surf bands, the amazing Insect Surfers and Crazy Aces. The March issue (with the Rolling Stones on the cover) should be available at newsstands everywhere any day now, and we hope you will thank the magazine for supporting the band, as well as our beloved surf music, by buying a copy!

In other news, the December live shows turned out really well and gave us some fantastic material for the live album. Thank you VERY MUCH to all who braved the awful weather and supported the band on this important occasion. The live album will be out for our 10th anniversary on June 14th, which we'll be celebrating at the Melody Inn with the Volcanos and the Mystery Men. We very much hope you'll be able to join us for that. We'll also be hitting the Melody Inn one time before that, in just three weeks, on Saturday, March 8th, with our good friends the D-Rays and the Grinning Man. Then we'll be taking a short break so Patrick and Savannah can get married in peace in late April! :) Plans are already brewing for this summer, including another boat cruise show in Milwaukee and a tiki/exotica show in Indy - stay tuned for more details.

Don't forget to pick up the March Guitar Player, and here's hoping you all have a wonderful 2014, filled with surf music - and we hope to see you in person at one of our shows at some point! And happy Valentine's Day - the Madeira loves you and thanks you for all your support!